The Dangerous World of Butterflies

Rachel Diaz-Bastin is a scientist. She accepts my use of magic as an explanation for metamorphosis, but prefers something closer to her discipline. “It’ so science fiction. The caterpillar increases its size twenty-seven thousand times and then decides that it’s time to harden its skin and make a chrysalis. It has a little bit of silk that it can spin, almost like a spider silk. The silk is very strong and the larva attaches itself to the underside of a leaf or a twig and hangs upside-down.” Lucky for me, since Diaz-Bastin often tours children through the butterfly house, she’s perfected a simple and straight-forward explanation of the incredible transformation. “The skin on the outside of the caterpillar hardens. This is the final molt. Caterpillars have a hard, tough exoskeleton. They must shed their skin just like a snake in order to grow. This is the final shed of their skin. As adult butterflies they don’t grow anymore.” Inside the hard chrysalis the transformation is in progress. “All of their body parts, every cell, liquefies.” It is, as she said before, science fiction. “This is weird stuff. All of their cells differentiate and begin forming the adult butterfly. It’s basically this big butterfly soup inside.”

I always knew the transformation from caterpillar to butterfly was marvelous. A little worm becomes this gorgeous thing with wings. But I had no idea that it became liquid first. Maybe the butterfly is nature’s most enigmatic creature after all. 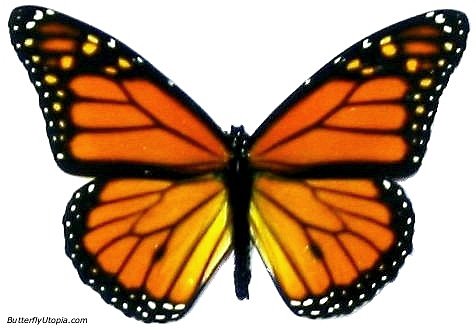 And then there was this marvelous little bit of information about migrating Monarchs:

In the spring the warming weather rouses the Monarchs. They mate as they head back north, an activity that quickly kills off the male. But unlike the direct trip south, the journey north takes a few generations. The Monarchs that made the long trip south and spent the winter in Mexico only make it as far as Texas and Louisiana. The gravid (egg bearing) females stay alive long enough to find a suitable locale for their eggs, whatever milkweed they can find—this being the plant food that both nourishes their larvae, and fills the caterpillars and the butterflies they eventually become with the poison that makes them unpalatable for the most potential predators. This next generation ecloses in short order and continues the trek north toward the Great Lakes where they lay their eggs. Soon their offspring head toward the East Coast, and it is their progeny who make the long haul—as far as three thousand miles—back to Mexico. This is an annual event: it takes four or five short-lived generations for the broods to make it north, and then, before winter sets in, the Mexico-bound generation—which lives several months—makes the epic journey south.

How do these butterflies—great grandchildren of the Monarchs who flew to Mexico the year before—know where to go and how to get there? That is still a fascinating and delightful mystery; theories include a role played by the position of the sun and another by the Earth’s magnetic force. The excellent eyesight of the Monarch is a navigational factor, the visual cues interpreted by the butterfly’s pinhead-sized brain. Favorable winds and air currents help make for a successful trip, along with plenty of luck. Those are the theories of how they fix their route. How they know—generations separated from the ancestors who last were in Mexico—where their destinations are located remains a phenomenal mystery.