In a book I was reading for Lent, Journey to Easter: Spiritual Reflections for the Lenten Season

, a retreat that then-Cardinal Ratzinger gave to Pope John Paul II and the members of the Roman Curia at the beginning of Lent in 1983, our current Holy Father argues that the renewal of the Church is in the hidden, humble heart of the family at Nazareth not in the halls of power.

In fact, to work with Jesus the worker, to plunge oneself into “Nazareth,” became the starting point for a new idea of the Church, poor and humble, a family Church, a Nazareth Church.

Nazareth has a permanent message for the Church. The new covenant did not begin in the Temple, nor on the Holy Mount, but in the Virgin’s humble dwelling, in a worker’s home, in an out-of-the-way place in “Galilee of the Gentiles” from which no one expected any good to come. The Church has always to start again from here, begin healing from here. She cannot give the right response to the revolt of our century against the power of riches if Nazareth does not remain in her as a lived reality.

I’ve been meditating on that passage, thinking of how insignificant Mary and Joseph and Jesus must have looked to their friends and family in those hidden years. Who could have guessed that in that humble home was the turning point of the history of the world? Jesus, God who came to dwell among us, chose to spend most of his time on earth not in public ministry but in a family. 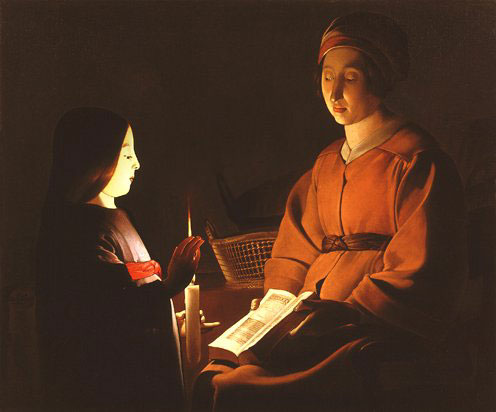 Recently I saw someone argue that the family—specifically the domestic church—is to the modern age what the monasteries were in the Middle Ages, protecting the small seeds of what will later spring up to be a renewal of culture. I like that image. The idea that what we mothers do in our homes, small and hidden and unvalued by much of the wider world, is the last, best hope for the future. (Ah, I just found the link to the blog post at The Common Room, which didn’t actually use the words “domestic church” that was evidently my own interpolation.)

Certainly motherhood and public life are not mutually exclusive when one looks at the entire span of a lifetime. Both before and after these hidden years there is much scope for women to do good work in the world. However, I think that especially during my children’s earliest years they need me to be as fully present to them here in the home as I can possibly be. Moreover, I believe I do more for the world at large by performing all the myriad small acts of love and self-sacrifice that being fully present to them entails.

These children have been entrusted to me, not to anyone else. No one can do the job of raising them better than I can because no one can do it with the sort of love I have for them. If I paid someone to take my place, I would be buying a poor substitute. What job in the world could I possibly be doing that would be so important that it could make that trade-off make sense? I can’t think of a single one.

But it’s more than that. It’s hard to articulate what I glimpse of the profound significance of what I’m doing here. I am merely a steward faithfully carrying out the charge that has been given to me. But I believe in God’s eyes this is one of the most important tasks he metes out. Tending to these immortal souls, raising up, hopefully, with His help, saints.

Is it possible the cultural revolution begins here with breastfeeding and changing diapers and cooing in small babies’ ears and holding them close, teaching them the meaning of safety and home and love? Can this hidden sacrifice change the Church? Change the world? I’m betting my life on it.