Hey, what a coincidence! I was just finishing up a post about our favorite books from the library this week, when I realized that Sarah at This Heavenly Life is hosting a What We Found at the Library meme. Perfect timing, Sarah. (By the way, doesn’t she have the sweetest girls? I love reading her stories, so funny. And so much like my Bella and Sophie.)

I’m not going to follow Sarah’s lead and tell you that one of these is my favorite, one is Bella’s favorite , one is Sophie’s favorite. We don’t tend to roll that way here. Instead, these are the books that we all have enjoyed together. 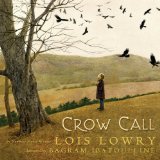 Crow Call by Lois Lowry. A sweet story about a girl and her father separated by WWII. They are almost strangers, trying to reknit the severed relationship. It has poignant moments: Daddy doesn’t know her favorite food is cherry pie; but he is willing to buy her two slices. They share a laugh at the waitress who thinks the narrator is a little boy. Daddy indulgently buys her a man’s hunting shirt and then takes her crow hunting. She is scared by the gun, by the idea of killing. And he is very gentle with her fears, confessing he was afraid during the war but now he is the strong one who feels no fear.

In the end, daddy chooses not to shoot any crows that day. While explaining that they do need to be shot to protect the crops, he is still decide to save the hunting for another day to allow her to enjoy the wild beauty of the crows.

The story is probably a little old for Bella, though she has enjoyed reading it and has asked for it again and again. It would be perfect to accompany a unit study on World War II.

The illustrations, inspired by Wyeth, are stunning. A soft brown palette. Some of the best storytelling using facial expressions I’ve ever seen in a children’s book. The father’s and daughter’s faces add so much nuance to their relationship, already so very deep in the text. I love the way for example it catches the girl’s fear hen she thinks about hunting, the father’s humor when he makes a giraffe face.

I heard about this one at my new favorite site Little Lamb Books.

The Napping House by Audrey Wood, illus. by Don Wood

This is a very cute book. It’s in the style of The House That Jack Built where each verse builds on the one before as one by one the various characters climb into bed. (There has to be a name for that but for the life of me I can’t think of what it is.) The mouse on the cat on the dog on the child on the granny. And then a wakeful flea comes and disrupts the nap. I love the simple text and the way the color palette gradually becomes a little brighter page by page starting with very muted blues as the rain falls outside the house and gradually warming until in the last page all is very vivid and colorful—sort of the reverse of the gradual dimming of Goodnight Moon. Not exactly a winding down for sleep book. I wouldn’t put it at the bottom of the stack. But not bad for the first of several books to be read at bed time. The girls are both very fond of it.

Judging a book by it’s cover, I would not think I’d like this one. The illustrations are much too bright and loud. The story gimmick doesn’t really grab me. But I have to admit this is a fun book that I enjoy reading to the girls—and it’s not too long which is a plus. Imagine counting fingers, piggies, and having an actual piggy sitting on the tip of each digit. But the ending is what really gets me, when after running amok and playing with the toes, each of the piggies kisses its opposite number goodnight and then the hands folded, go to sleep. This is a good winding down book. Sophie is especially fond but Bella enjoys it too.

Finally, honorable mention goes to The Little Friar Who Flew

I was excited to see a story about St Joseph of Copertino at our local library. Sophie loves this one and calls it the “Francis” book. I’m not even certain where she knows St Francis from; but no matter how many times I tell her the friar in this book is St Joseph of Copertino, and she repeats after me Jophas; she insists on calling it the Francis book.

It’s a cute little bio story that focuses almost exclusively on the saint’s levitation. I have to say that after reading it a few times I started to like it a bit less. There isn’t really much about God here. In fact the only time God is mentioned is in reference to the statue “that reminded him of the mother of God.” Sure, a creative reader can add to the story, explaining that Joseph’s joy is from his awareness of the presence of God in creation, that he is not alone not only because of the animal friends and the flowers but also because Jesus is with him, etc. But I think one shouldn’t have to add to a book about a saint to make t a good catechetical tool. It should stand on its own and in that regard this story is a bit lackluster. It’s not a bad book, there is nothing wrong or untrue. But neither is it a great book.