By Melanie Bettinelli on January 23, 2010 in Uncategorized 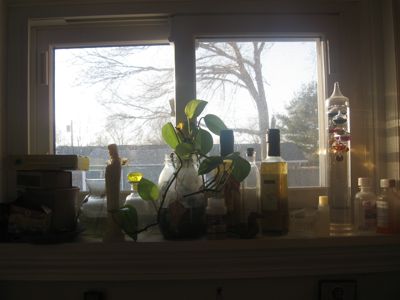 The setting sun shining through my kitchen window caught my eye this evening.

You can see the clutter it’s accumulated in addition to all the stuff that’s supposed to be there. One of these days I’ll get around to clearing it off. This is a sort of memo to myself. And a peek at some of the nitty-gritty of real life here in Casa Bettinelli.

On the far right, children’s Tylenol and baby shampoo. Put there to be out of reach of little hands. They should be moved to the bathroom cabinet.

The various glass bottles are supposed to be there. But they are all a bit dusty. Probably greasy as well. he hazards of glassware in a kitchen that actually gets used.

In the middle, next to the ivy, an open jar of bubbles that has lost its wand and lid. I confiscated it some time at the end of the summer so that Sophie could not spill it. And there it still sits.

And speaking of the ivy in a jar, please don’t notice how green that water is.

Behind the statue of Mary is a little vase with the last flower Isabella picked for me this fall before everything died. It has exploded into a white puff and the water is very green. Ick!

The flower pot on the far left contained Bella’s attempt to grow an apple seed. It sprouted, grew two leaves and then died.

Sitting on the saucer in front of the pot is the food coloring. Last used to dye eggs at Easter, I think.

On top of the flower pot is a box of matches. Stowed there during the Christmas season when we were lighting candles nightly. The matches kept being left on the table where Sophie could reach them.

On top of the box of matches there is a box of Culturelle, probiotics for the girls.

And thus ends the tour of my messy kitchen windowsill.

Guess what I’ll be doing on Monday. 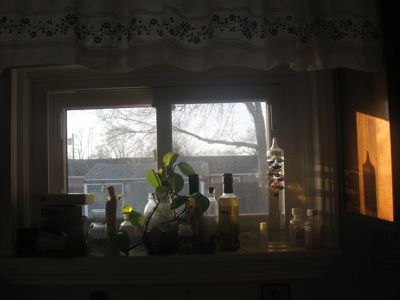 Sisters on a Rock
Stop!