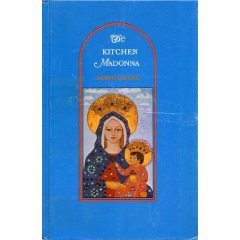 Ever since I read my first Rumer Godden novel (In This House of Brede� Oh it�s supurb!!!) a few years ago, I�ve been hungrily devouring everything Godden I can get my hands on.

While I�m not as big a fan of her Indian novels and some are definitely better than others, I�ve never found a flop by Godden. Still, I�d have to say that The Kitchen Madonna

is one of her finest tales. Oh I want to go out and buy a little red lamp now.

The Kitchen Madonna is one of the most widely recommended of Godden’s books (at least in the blog circles that I frequent) and is sadly out of print, though used copies can be found at Amazon and elsewhere. My copy, which arrived last week, is a former library book. I actually like that as it means a sturdy binding. It being Godden, I wasn’t too worried about The Kitchen Madonna being over-hyped. Nor was it.

Gregory and Janet’s parents are both working architects and so the children have been subjected to a series of foreign-born housekeepers/caretakers. None of them stay for more than a year and although Gregory’s mother can’t understand why he is withdrawn, it probably is a mechanism by which he protects himself from getting too attached. Marta is different though. She’s older. She’s stable. She doesn’t go out nor invite friends in. She’s a bit sad and there’s something about her that makes Gregory recognize a kindred spirit. I don’t want to give too much away; but at the same time I want to write about this beautiful story.

Godden has a great respect for the personhood and interior life of her child protagonists. They all tend to be outsiders, marginalized or neglected dependent on an adult world that is not so much cruel as too caught up in its own concerns to really understand the child’s needs. The child often has a knack of perception, giving them the ability to reach out to others who have also been wounded by life.

It’s not really a children’s story, even though it has a child protagonist. However, I think older children could appreciate this tale of love and sacrifice every bit as much as an adult does. The only thing that would make The Kitchen Madonna better is a reissue with a really good illustrator. I�d love to see something like what Barbara Conney did for The Story of Holly and Ivy. Because there are only a few pictures in the edition I have, I doubt Bella will enjoy it for several more years. However, it will be waiting when she is ready to dive in. 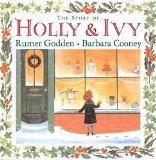 Bella and Sophie received The Story of Holly and Ivy from my parents for Christmas/Epiphany. It became an instant favorite. As I’d expect from Godden, it’s a beautiful story. A Christmas story that has just enough sweetness but isn’t overly sentimental.

Ivy is an orphan, the only one in the orphanage who hasn’t been invited to share Christmas with a family. She’s being send to the Infant’s home in the country. Except she refuses to go and tells a story about staying with her grandmother in Appleton. A story to which she stubbornly clings so much so that she gets off the train in Appleton, rather surprised to find there really is an Appleton.

Holly is a little Christmas doll dressed in red and green who doesn’t get purchased on Christmas Eve. Like all of Godden’s dolls, she’s sentient but cannot move on her own or act directly. She can only influence her environment by wishing. Her helplessness echoes Ivy’s helplessness. Her wish for a child to take her home and love her directly mirrors Ivy’s wish for a grandmother.

There is also Mrs. Jones, the policeman’s wife, who decides to put up a Christmas tree for the first time in years. She can’t quite remember what Christmas is about but feels that even with a tree and all the trimmings something is missing: shouldn’t there be a little girl?

It soon becomes clear that what moves Mrs Jones isn’t nostalgia, but rather a need to prepare her home to welcome an unexpected guest. For Mrs Jones’ preparations draw Ivy to her like a beacon.

Even though on the surface this seems a secular Christmas story, it’s really about the action of grace. And Godden hints at this with the church bells that summon unseen worshipers to a midnight service. It’s a world from which Holly and Ivy are excluded and lonely Mrs Jones whose husband must work all night on Christmas Eve. And yet those bells seem to be the source of the magic which fulfills the mutual wishes of the girl and the doll.

Oh and I have to mention Barbara Cooney’s beautiful illustrations. They are perfect and they make this story so much more accessible to Bella. It’s not a short story and though Bella has an amazing attention span, I’m not sure she’d be so enamored of the story sans pictures.

And then there’s China Court: the Hours of a Country House

. This is not a children’s book but a novel and rather different than anything else I’ve read by Godden so far. The narrative has a stream of consciousness flavor reminiscent of Virgina Woolf. It follows several generations of a family that inhabit a country house. The central characters are a grandmother (alternately known as Mrs Quinn and Ripsie) and her grand daughter, Tracy, but the narrative sort of drifts back and forth in time through the two characters’ memories as events in one generation echo those in another. History does repeat itself but it does rhyme.(As Mark Twain famously said.)

A central figure in the novel is the old book of hours that the grandmother keeps by her bed. I love the way the psalter is the central metaphor, the way in which the psalms are the same week after week, year after year, and yet there is always something new and fresh in them too.

I’ll leave you with Godden’s Preface, which really says so much about the kind of book this is. Either it will delight you or you will find it maddening:

In real life when one meets a large family, with all its ramifications of uncles, aunts, and cousins, as well as grandfathers and grandmothers, grandchildren, and great-grandchildren, their friends, servants, and pet animals, it takes time to distinguish them; one does not expect to remember straight away that it is Jane who is married to Bertram, Jack who was born with a club foot, Aunt Margaret who had the unfortunate love affair. One has to get to know them.

China Court is a novel about five generations of a family, so that, as in real life, there are many names and personalities, but I believe if the reader is a little patient—and can bear not to skip—they will soon become distinct and he will have no need to look at the family tree on the frontispiece.

Life, Chaucer sys, is a “thinne subtil knittinge of thinges”; naturally it is difficult to understand.

I found it delightful getting to know the Quinn family. I hope you will too.