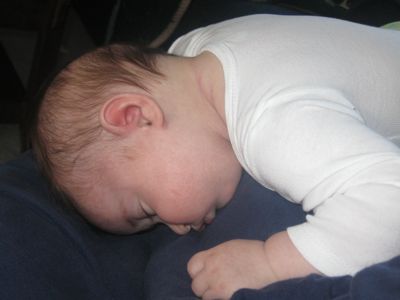 We used to have three kids who mostly slept through the night with an occasional disturbance; but things have been different in the aftermath of the flu.

Sophie and Bella have been waking up almost every night and sometimes multiple times a night. Last night, for example, Sophie was up at 1, 3 and 5; Bella was up at 2, 4, and 6. Add in Ben’s night nursing and neither Dom nor I got much sleep.

Usually all Sophie needs is to be gently resettled. I pick her up and hold her for a minute until I feel her grow limp. Then I gently whisper to her, “all right… ok,”  and she resettles into her crib, head on the pillow, dolly or stuffed animal in her arms. I spread her blankets over her and sing just a verse or two of a song and she’s fine. Of course when Sophie wakes, Bella wakes and frequently Ben wakes too. Some nights it feels like a three-ring circus and as there are only two of us, settling everyone down can be a feat.

Bella usually just needs to have some help using the toilet. Or else she’s lost her (pig, pillow, sippy cup, tissue, sock, blanket) and needs help finding it…. usually right next to her head. Sometimes she is able to just wake us up and Sophie and Ben sleep through the disturbance. But not always.

And Ben? Perhaps it’s just that he’s a big and growing boy. He does seem to be past the post-flu refusal to be put down to sleep in the bassinet at all. Now I do get one or two hours at a stretch where I can put him down and get a bit deeper sleep for myself. And last night I was even able to put him down once when Sophie started to cry and he stayed asleep until the next wake up. But he’s still waking to nurse frequently. And at least one of his wake-ups, the one that had very noisy screaming instead of his usual quiet whimper, seems to have been the cause of Sophie’s waking.

I’m hoping this is just a quickly passing phase. I’m really missing my sleep. And I wonder how parents with more kids than we have weather these kinds of nights.