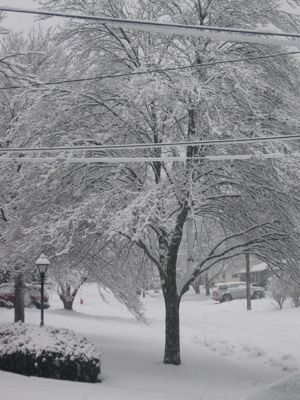 We were up early yesterday morning and the girls spontaneously decided to get dressed on their own while I was eating my breakfast. I was eager to get out to the post office and the pharmacy and it looked like they were going to be helpful for once. 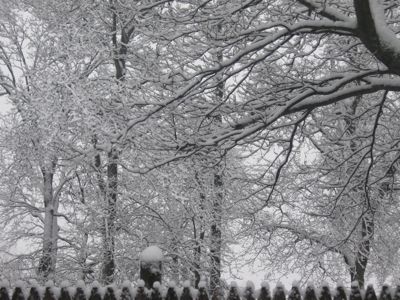 It was snowing but Dom said it was supposed to turn to rain. He thought it was funny that I said I hoped we could get out before it did so. “You want to drive in the snow?” 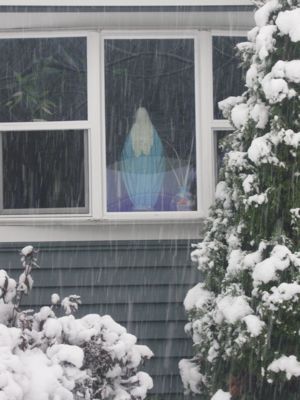 “Well, not especially; but I really don’t like the idea of trying to get three children in and out of the car in the pouring rain.” 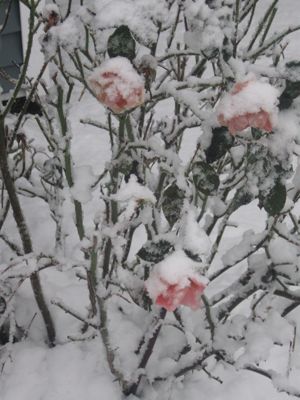 I was just getting into my boots and getting Sophie zipped into her snowsuit when my sister walked in the door. She’d been sent home from work because she wasn’t feeling good. She said the road conditions were terrible and it had taken her almost three times the usual time to get home: ninety minutes for a 25 minute drive. Dom came in from cleaning off the cars and said that I wasn’t allowed to go. In fact, he wasn’t going in to work until conditions cleared. 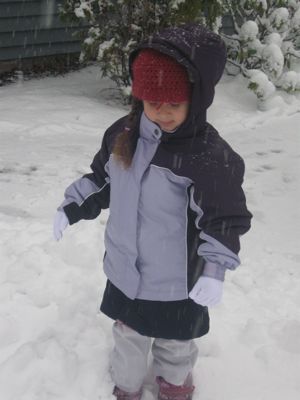 But we were already in the process of suiting up the girls and I knew there would be a fuss if we reversed the process. So I forged on, figuring we could walk around outside for a little bit at least and the girls could enjoy the snow. 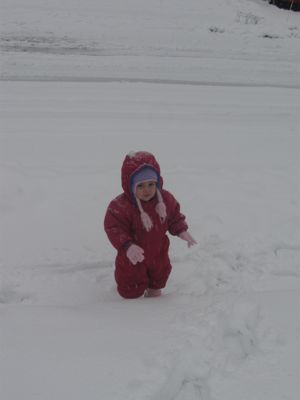 More than an hour later Bella and I had made a snowman (me) and a snow girl (her—my first attempt at a second story for my snowman was a ball too big for me to lift so that became the base on which she built her snowgirl). 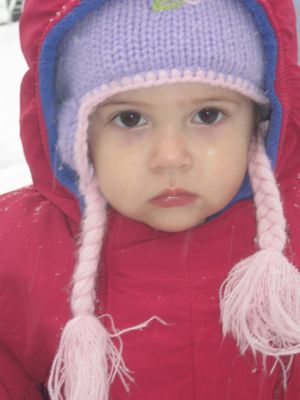 Sophie had come out, gone back in, and come back out again. I finally got her to stop crying and have some fun, patting snow onto the snowman. Bella intrepidly foraged in the back yard for sticks for the snowman’s arms and found some great ones all on her own. But Bella decided she was ready to go in before we found arms for her snow girl and Ben woke up and decided to eat. Had it not been for those factors, I might have spent all morning out there playing in the snow. Strangely, I haven’t had a chance to make a snowman since I moved to New England. At my first apartment where I lived with roommates from the time I moved here in 2000 and where Dom and I lived until Bella was a year old, there was only a small garden and no place where you could build a snowman. Then in our second apartment there was a huge yard; but I was pregnant with Sophie that winter and my one attempt to make a snowman failed when I ran out of breath before I’d even constructed a satisfactory base. 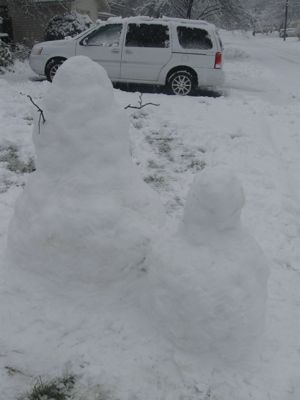 So since I’m not pregnant and I have my sister here to listen for the baby, I allowed myself to be a big kid for a morning, diving into snowman construction, working side-by-side with my sweet little girl who is finally old enough to really appreciate the activity. Who knows when I’ll have the chance again. 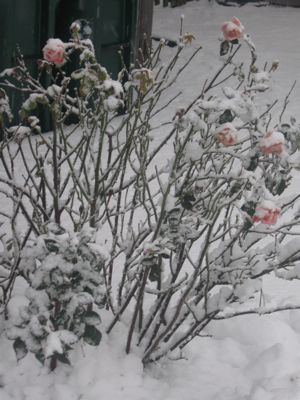