Bella Spills the Beans and other tales
1 comment
Isabella

Bella Spills the Beans and other tales

It’s been a while since we had any Bella stories; but she’s been up to quite a bit in the past few days. We’ve been in stitches.

Why do they seem to come in waves like that? It’s one of life’s mysteries.

Buying a present for daddy with a three year old.

It wasn’t anything huge. Just I thought Dom could use some new pajama pants and, well, they’d make a nice little present to put under the tree. And there they were on sale. Bella helped me choose the color. I tossed them in the cart along with the diapers and toilet paper and then shoved them in my closet along with the Saint Nick candy.

When Dom got home from work he opened a package that had come from Amazon, a few new pairs of khakis for work. Bella saw them and announced that we’d bought pants for daddy today at Target. It hadn’t occurred to me to ask her not to tell (not that it would have done any good) nor did it ever cross my mind that she might spill the beans.

Dom and Theresa and I had a good giggle and Bella got that look on her face of intense concentration, trying to figure out why we were so amused.

Bella has recently taken to pretending Ben’s crib mirror is her laptop computer. First she had a pile of papers which she told me she was scanning into her laptop. Then she was holding the mirror up and pretending to talk into it. She told me she was chattering with her friends. We just had a Skype chat with my parents in Texas the other day, so I suppose that’s what she was imitating. It was super cute.

And then of course Sophie imitates Bella. She holds up the mirror and says, “friends.”

Baby in the manger with animals

This morning Bella spent some time arranging the refrigerator magnets, collecting all the various animals and placing them on the bottom door to the freezer compartment. When that was done she announced that they were animals for the Baby Jesus.

She then ran off to her room and reappeared with a little step stool and a baby doll and proceeded to arrange them beneath the magnets. “I’m putting the special baby in the manger,” she told me. 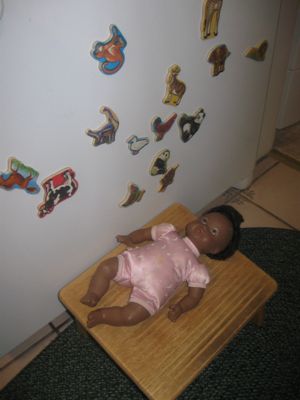 I haven’t had time to set up our nativity scene yet; but Bella’s improvising quite nicely with the materials at hand.

Was That in the Job Description?

“Mama, I need you help,” Bella called from the bedroom.

“What’s the matter?” I yelled back.

“Gina’s stuck under the bed. She crawled under there. Can you get her out?”

I figured she’d somehow shoved one of the dolls under there—they go through so many names these days. But when I knelt down beside the bed and peered underneath, I saw nothing. For once there wasn’t a single toy under Bella’s bed. Then I remembered that Gina was her imaginary friend, the one who is “my little girl.” So I reached out my hand and assisted the pretend friend to emerge from her hiding place.

All in a day’s work.