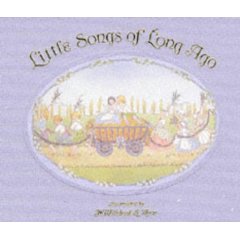 I got this beautifully illustrated book of nursery rhymes, Little Songs of Long Ago by Henriette Willebeek Le Mair, at the library book sale. I think this brings our total of nursery rhyme books up to half a dozen.

I’m a sucker for nursery rhyme books, especially beautifully illustrated ones. One of my favorite books growing up was a big collection of nursery rhymes and in high school and in college I would find these rhymes tripping off my tongue in all sorts of situations and people would look at me like I was crazy. Evidently everyone else does not have dozens and dozens of nursery rhymes swimming about in their heads. Which is a shame because I think they are as much a part of our cultural patrimony as Shakespeare or the Bible—just as necessary for true cultural literacy.

For example one of the nursery rhymes I missed learning as a child was quoted in Dickens’ Bleak House (my favorite Dickens novel):

There was an old woman tossed up in a basket
Nineteen times as high as the moon;
Where she was going I couldn’t but ask it,
For in her hand she carried a broom.

When I read the novel in high school, I was at a loss to understand why they were referring to Esther Summerson as “old woman”. And yet I was remarkably literate in the language of nursery rhymes cmpared to my classmates. (I id get many of Dickens’ other references.)

An even more telling example of a rhyme I didn’t know was one that was used extensively in the novel 1984:

Oranges and lemons,
Say the bells of St. Clement’s

You owe me five farthings,
Say the bells of St. Martin’s

When will you pay me?
Say the bells of Old Bailey.

When I grow rich,
Say the bells of Shoreditch.

When will that be?
Say the bells of Stepney

I do not know,
Says the great bell of Bow

I remember being puzzled by this when I first read the novel. I knew it was a nursery rhyme that was being quoted, but since I’d never heard it before the lines didn’t have the resonance that Orwell intended.

In the novel the protagonist Winston cannot remember all of the rhyme, he fills it in bit by bit with help from other characters and the ominous last lines obviously foreshadow the end of the novel. It’s funny because for Orwell the rhyme represents a shared cultural heritage that the totalitarian government is eradicating. Once the last character to remember the rhyme is gone, the rhyme will be lost forever.

Not knowing the rhyme by heart, not sharing in that part of the cultural heritage made me miss a part of the experience of reading the book. Even if the rhyme is footnoted or explained by the teacher, that isn’t quite the same as having the echo from one’s childhood, the eerie recognition of the hitherto unnoticed dark undertones. In fact, Orwell’s bleak future had already come to pass in as much as that heritage of nursery rhymes that he takes for granted can no longer be assumed for his readers.

Now I wonder how many of today’s children raised on Sesame Street and Barney and Caillou will learn any nursery rhymes at all. And what do we lose when they are no longer a part of our common language?

We are the hollow men
We are the stuffed men
Leaning together
Headpiece filled with straw. Alas!
Our dried voices, when
We whisper together
Are quiet and meaningless
As wind in dry grass
Or rats’ feet over broken glass
In our dry cellar

Those who have crossed
With direct eyes, to death’s other Kingdom
Remember us—if at all—not as lost
Violent souls, but only
As the hollow men
The stuffed men.