I was going to write about Ben today. Since today’s his three-month mark. But I can’t think of what to say and I forgot to take pictures. Instead I feel like writing about Sophie. I’ll catch you up on Ben tomorrow. And I just realized I forgot about my book giveaway. I’ll do that tomorrow too. I’m so behind in everything.

But on to Sophie.

I love putting Sophie’s hair in pigtails. So cute. But it is almost impossible to part Sophie’s hair down the middle because she is very ticklish on the back of her head. I try to run the comb down to make a part and she flinches and shrieks and giggles. I’ve never seen anyone super ticklish on their head before. It’s very funny. And cute

Sophie’s new favorite thing is playing with bubbles in the sink. Now that she’s finally tall enough to be able to reach it while standing on a stool. It’s about the only way I know of to distract her when she’s in full whine mode, begging to be taken out to the swing. 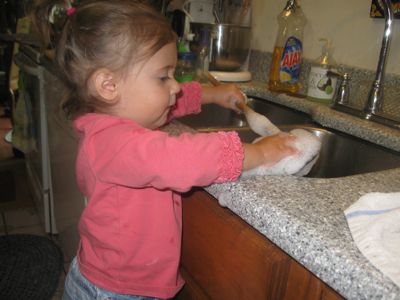 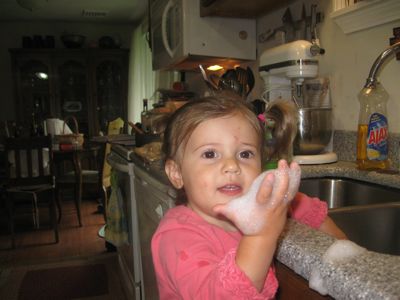 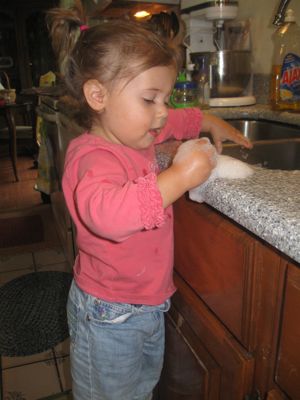 Isn’t she the cutest?

The swing…. Oh my. Maybe it’s because she spent so much time sleeping in the swing when she was a baby. She’s in love with it.

First thing Dom gets when he walks in the door at night: “Awing, awing awing.” Over and over and over.

I wish there were a way to get her a swing she could get in herself. Or a toddler version of the baby swing that rocks itself and doesn’t need to be pushed. Seriously. The girl is addicted.

She’s in that climbing phase of toddlerhood. And has the scrapes and bumps and bruises to prove it. I’m afraid to take her out in public lest someone think the worst about my poor beat-up little girl. At least half a dozen scrapes on her face from at least half a dozen different falls. Mostly from chairs.

She’s in love with her big sister and her baby brother. She tries to do everything that Bella does. She carries her dollies around wrapped in blankets and puts them in Ben’s swing.

At every meal she tries to climb into my lap and will eat food from my plate that she won’t eat from her own. She clings to my skirts, literally, when I’m trying to move about the kitchen, crying, “Mama, mama.” She wants me to put on her shoes, take off her shoes, put on her jacket, take off her jacket twenty times a day. And I do it. Again and again. Because who could refuse those brown eyes.

Can you tell I’m madly in love with my Sophie? 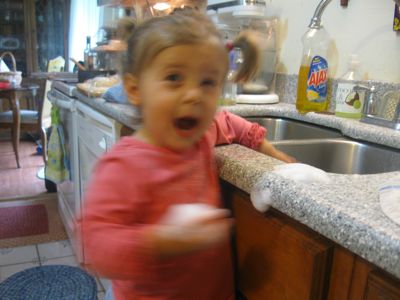