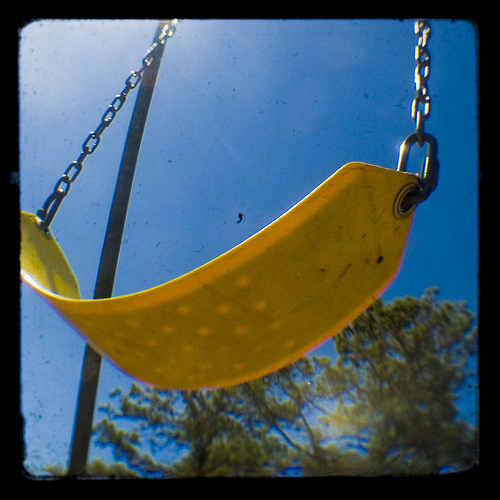 We were up and out very early this morning—early as in 8:00, as in I’m usually not even dressed yet—dropping my sister off for a minor medical procedure that required some sedation. After we dropped her off (big screams from Sophie as we pulled away: “Tree! Tree!!!” aghast that we were leaving without her beloved auntie) I took the girls to the playground for a brief visit. Ben had fallen asleep and it seemed too good an opportunity to pass up. There can’t be many more good park days left this year.

We left Ben in the car (Oops am I not supposed to admit that?). It was right there and I checked on him every few minutes. But it was so crisp and windy that I didn’t have the heart to pull him out. Especially since I’d forgotten his hat.

Anyway, that meant that for the first time in a while I had a bit more free reign to run and play with the girls. Didn’t help me prevent Sophie from doing a face-plant off the slide, though. She was just too quick for me. I thought she was happily playing in the tunnel and the next thing I knew I heard her chirp, “Slide!” And then she was eating a mouthful of bark mulch. No major damage. I picked her up and brushed her off and sat for a moment on the bench and then she was tearing off again. Oh there is a nice scrape on her cheek to match her collection of bumps, bruises and scrapes—half a dozen on her face and forehead at least in the past week from half a dozen separate incidents, mostly involving climbing.

Anyway, for once I was able to pick Bella up and put her on the swing. She always wants me to do so but between Sophie and Ben I just can’t manage it most days. Then of course Sophie wanted to swing too and the little kiddie swings are across the playground. But the big swings were nice big ones. Broad enough even for me. (Let’s just say three children haven’t made me any thinner and leave it at that.) So I picked up Sophie and held her on my lap and we had a nice time swinging together. She gets into the zone when she’s on a swing, Sophie does, so calm and zen like.

Well eventually Bella got tired of trying to pump herself and hopped down to go watch other kids on the playground. Then Sophie got down too, leaving me alone on the swing. I gripped the chains tight and began to pump my legs in earnest and soon I was really swinging.

Toes pointing into the blue October sky, cold air whooshing past my face and around my ankles and under my denim skirt. Higher, higher, higher. Until I started to feel a bit light headed. How long has it been since I’ve been on a swing, really flying?

It hasn’t lost any of its magic. I still feel light and strong and free. I feel like if I just pump a little higher and a little higher I might suddenly take off and find myself up there among the swooping starlings and honking geese, above the coppery trees.

Eventually, of course, Sophie decided I had to stop. I scraped my feet in the bark until I slowed enough to hop off. Still haven’t quite lost the touch, though I’m much more afraid of skinned knees than I used to be when I’d just jump off in mid-air. Funny but at times I still feel like that skinny girl with constantly banged-up knees. Now, though, I see her more and more when I look at my oldest daughter and trace the bruises and scrapes whose origins neither she nor I can guess.