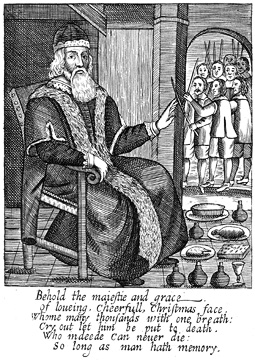 This is one of those geeky posts in which I get all excited about connecting the dots and learning something new.

One of Bella’s current favorite A.A. Milne’s poems is “King John’s Christmas”. Here’s a bit of it:

King John was not a good man,
He lived his life aloof;
Alone he thought a message out
While climbing up the roof.
He wrote it down and propped it
Against the chimney stack:
“TO ALL AND SUNDRY—NEAR AND FAR—
F. CHRISTMAS IN PARTICULAR.”
And signed it not “Johannes R.”
But very humbly, “Jack.”

“I want some crackers,
And I want some candy;
I think a box of chocolates
Would come in handy;
I don’t mind oranges,
I do like nuts!
And I SHOULD like a pocket-knife
That really cuts.
And, oh! Father Christmas, if you love me at all,
Bring me a big, red india-rubber ball!”

It got me thinking the other day. Wondering about who exactly Father Christmas is and where he came from. It seems I’ve known about him all my life. First of all of course from The Lion, the Witch, and the Wardrobe, which I think my parents first read to me when I was very young. I love that scene when he finds the children and the beavers on the run and gives them all the most perfect gifts.

and I’m sure I’ve heard the name in other places that I cannot now recall.

I always translated in my head Father Christmas=Santa Claus because both are jolly men who bring presents at Christmas. But now I began wondering about that. I know Santa Claus derives from St. Nicholas; but where exactly does this Father Christmas come from?

Wikipedia to the rescue!

The symbolic personification of Christmas as a merry old figure begins in the early 17th century, in the context of resistance to Puritan criticism of observation of the Christmas feast. He is “old” because of the antiquity of the feast itself, which its defenders saw as a good old Christian custom that should be kept. Allegory was popular at the time, and so “old Christmas” was given a voice to protest his exclusion, along with the form of a rambunctious, jolly old man.

Now that totally makes sense. And Father Christmas as an anti-Puritan allegory so totally appeals to my nerdy Catholic self. Even better:

The earliest recorded personification of Christmas appears to be Ben Jonson’s creation in Christmas his Masque[13] dating from December 1616, in which Christmas appears “attir’d in round Hose, long Stockings, a close Doublet, a high crownd Hat with a Broach, a long thin beard, a Truncheon, little Ruffes, white shoes, his Scarffes, and Garters tyed crosse”, and announces “Why Gentlemen, doe you know what you doe? ha! would you ha’kept me out? Christmas, old Christmas?”

Ben Jonson! I love it. I’m bookmarking this Masque to read come December.

Wikipedia continues to say that in the Victorian era Father Christmas merged with St. Nicholas to become the modern Santa Claus and that modern Britons use the two names interchangeably, though they use Father Christmas more frequently.

Anyhow, I thought I was going somewhere more with this post but forgot what else I might have intended to say. I hope this little excursion was fun for someone else too.