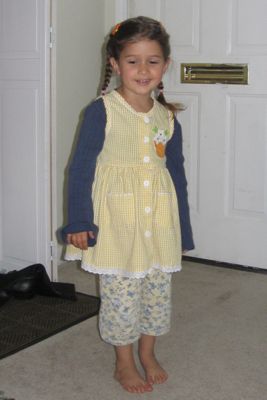 One of the things I love about my increasingly independent three-year old is that she dresses herself much of the time. This morning as I helped her pick out her clothes, she decided she wanted to wear her yellow sundress.

I still have to sort through Bella’s clothes and put away the summer things, bring out the fall/winter things and also change out 3T clothes for 4Ts. In the meantime this sundress which is really rather too short was still in her drawer. I told her she could wear it if she put a shirt underneath and some pants. I helped her choose a white t-shirt and then had to run off to feed a crying Ben.

Some time later Bella appeared in the living room wearing this blue sweater with the sundress over it and these yellow capris with a cute butterfly and flower print. She’d buttoned most of her buttons all by herself; but had of course got them misaligned and wanted me to help fix them.

Definitely an ensemble only a three-year old could pull off. I gave in to the inevitable and helped her accessorize with orange butterfly barrettes. Hey, they match the orange flowerpot on the sundress.