A busy, busy Saturday. It started rather sweetly for me, cuddled in between Ben and Sophie.

I’ve become so used to Ben only waking me once per night that any night he wakes more than once feels tough. Last night he woke at 3 then at 5 then again at 6. So when Dom’s alarm went off at 6:30, I was a bit cranky and tried to just ignore it and go back to sleep. (He was going to the parish men’s group which meets every other Saturday at 7:30.)

Sophie woke up soon after Dom did and so I woke again when he brought her into our room to change her diaper. When he was done, it was clear she wasn’t really ready to wake up, so I let her crawl into bed with me and snuggle up against my back. She never does this, so it was a wonderful treat to have her fall asleep again cuddling me for another twenty minutes or so. Which was just enough time so that when she and I woke again, I was feeling refreshed and ready to face the day.

When Dom came back from men’s group, I took Ben and sneaked off to the library book sale. I got quite a haul of treasures, including seven (!) L. M. Montgomery books. 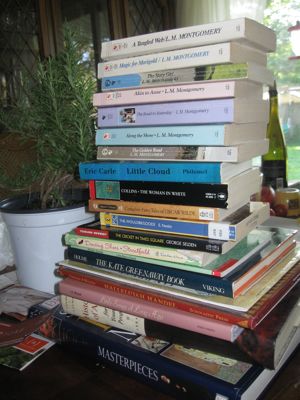 My library sale book haul. (Minus one volume of Raggedy Andy stories that Bella had already absconded with.

Then back home, fed Ben, and away to the farmer’s market with Dom and the girls. It was in a slightly different location this week, moved down the beach to make way for a huge exhibit of trucks and emergency vehicles of all kinds called “Touch a Truck”. We walked around the perimeter but decided not to pay the $20 family admission because we figured Bella would just get scared and run and wouldn’t get much more out of going in that she got from our walk. Perhaps later she’d be eager to climb about inside but now she’s a bit wary.

This is the time of year when the farmer’s markets are really at their best here in New England. It was a lovely autumn day, warm in the sun cool in the shade with just a bit of crisp in the air that made a hot coffee a welcome treat but didn’t make the kids miserable. Bella’s favorite moment might have been finding a baseball on the beach. She clutched it all the way through the market and brought it home with her. By the time we got home it was time for lunch and naps. And by the time all three kids had been settled for their naps, I had about half an hour to rest before Sophie woke up and then it was time to start making dinner.

Tacos. Yum. Dom made fresh guacamole and we had some of the last of the tomatoes from the garden. Then baths and bed for the girls. And now it’s almost time for me to go to bed.