Seeking a Playground in Spring, a GPS Adventure
3 comments
Share:FacebookTwitter
Isabella and Sophia

Seeking a Playground in Spring, a GPS Adventure

After yesterday’s rain, today dawned bright and sunny and warm enough, I decided, to either go for a walk or to visit the playground. Bella cast her vote for the playground and so that’s what we did. Bella helped me pack up some snacks after breakfast (Bella said she could eat them sitting on the bench at the park.) and we all piled into the car and set out on an adventure.

I knew I’d seen a beautiful tree-filled park with a spiffy playground somewhere on my travels last fall; but I couldn’t remember where exactly it was. I looked at google maps and found a likely candidate and we set out, led by my trusty GPS to find a nice place to play. The park was not the one I’d remembered. It had a pond and many trees and a collection of soccer fields; but no real playground. We walked around for a bit in the stroller to see what was there but as I explored down a likely looking trail that followed some disused railroad tracks, Bella kept asking about a playground. So back to the car and back to the GPS to find more candidates. I had to transfer the sleeping Sophie from the stroller to the car seat but a flutter of the eyelids was her only movement as I strapped her in.

The next park was a bit hard to find. The GPS led us to a dead end street. The actual park entrance was on another street. This park seemed to be a collection of little league baseball fields. The sign indicated there was a playground but as the whole complex was behind a chained and padlocked gate, I assumed the playground was only for use during baseball games. On we went to the next park on the GPS’s list.

Once again the GPS led us down a residential street and not to a park entrance. Or so I thought. A second glance showed a small lane leading to a pedestrian gate with a small playground beyond. Not the one I’d remembered, but good enough. No parking lot, but I parked on one side of the lane and I hauled out the stroller and strapped the sleeping Sophie in as Bella ran for the slide. Sophie slumbered on as I pushed Bella on the swings and watched her run.

After Sophie woke up and I pushed her in a swing for a bit, we had a picnic lunch sitting on a bench, much to Bella’s satisfaction. Then Sophie crawled around in the bark mulch. 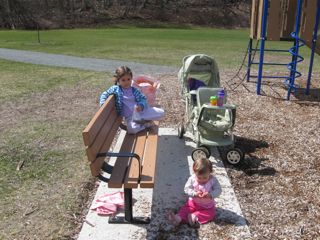 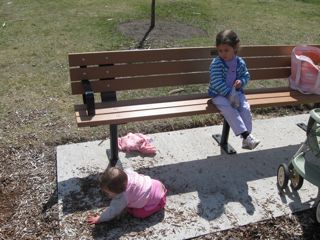 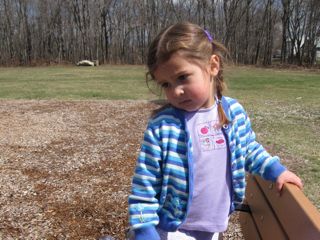 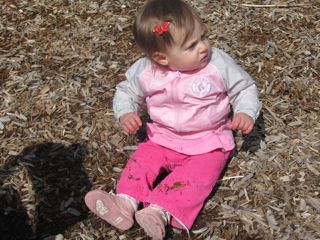