As new homeowners we are very excitedly planning out all our yard and garden projects now that spring is here. Even though it was only in the 30s today, it was sunny and we felt compelled to make a trip to our local nursery to pick up some potting soil and pots to transplant the tomato and pepper seedlings Dom has sprouting on the kitchen table. We also stopped at another store to price lawnmowers.

it was a short trip but on the way home Sophie fell asleep. This has happened the last few times I’ve gone out with the girls in the morning and it always results in late afternoon crankiness. I’ve found that once a brief car nap happens a longer bed nap will not occur. So we decided to keep driving.

We checked out a state park near our house and found there is a pond and a paved walking trail. I made plans to take the girls out there the first nice warm day we have. Sophie still snoozed on so we decided to drive on.

We followed the main road that goes by our house and found that if you follow it long enough you wind up at the beach! 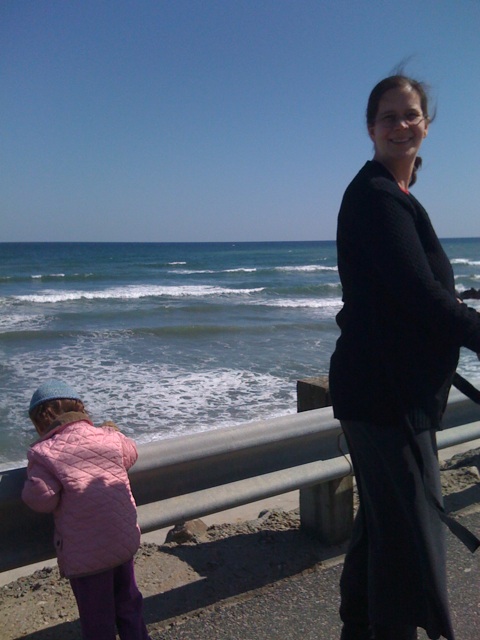 We braved icy winds to get out and whiff the fresh sea air, to watch the waves come crashing in and the seagulls soaring on the wind. We listened to the lovely rumble of the waves washing on a pebble beach. Bella threw some rocks and laughed at the gulls and did not want to leave. Sophie stayed in her seat and played games with her hat. I stepped out to the railing and the retreated to the car’s windblock.

Then we drove on and found a little seaside restaurant that was having a slow off-season day. I got a haddock sandwich, Dom had a plate of fried clams and the girls split a burger and fries, Sophie eating only the meat as we’re still cautiously staying away from wheat.

Our waiter was very thoughtful and was sure to bring rolls with our soup so the girls could snack while their burger was cooking. Unfortunately, Sophie was unable to partake. So i tried to tempt her with food from my mommy bag of tricks. Once the rolls and soup came she turned up her nose at rice cakes, raisins and cheese. She wanted to emulate her big sister and poach from our plates.

I looked at the rolls and the lobster bisque and clam chowder and apologized, “Sorry, Soph, nothing here you can eat.” But she knows the difference and was having none of it. A crayon distracted her for a minute (I said the waiter was kid-friendly, right?) but then she was begging again and getting more and more shrill.

Finally I pulled a desperate mommy move and handed her the little foil-covered tub of butter. She was delighted. Finally, something that came from one of our plates! She squeezed it and squished it, enjoying the sound of the crinkling plastic. Then I looked over and noticed that she’d managed to squeeze it open. She was very happily slurping down mouthfuls of butter. 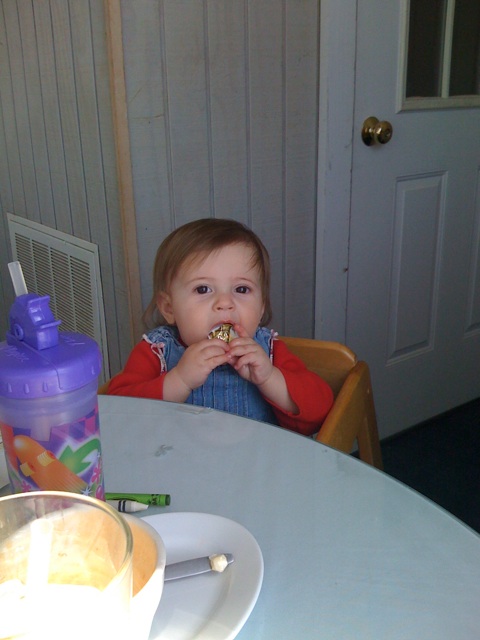 I spread a bit of the butter on her rice cake and let her continue to play with the tub. That held her until the rest of the food arrived. Then she was able to munch on burger and fries, pieces of squash from my vegetable medley, and to try lemons and pickles (both of which she seemed to like.) For some reason she decided to switch sippy cups with Bella. I’d given Sophie the straw cup because she seems to find it easier; but she insisted on having the one Bella was using. Much to Bella’s chagrin. I poured some of my ice water into both cups and the novelty mollified both girls; Bella allowed for the switch. Sophie ate more of the burger than Bella did (though in Bella’s defense, she did have some snacks in the car: a peanut butter wrap and some cheese).

The drive home was uneventful and we’ve had a quiet afternoon while Bella naps. Leftovers for dinner, now, the stuff we didn’t eat at lunch.