I’ve been playing with my sewing machine, doing a bit of piecing. None of these blocks has a definite home in a fully planned project, just a few ideas I’m tossing around. Rough drafts, I suppose you could say. 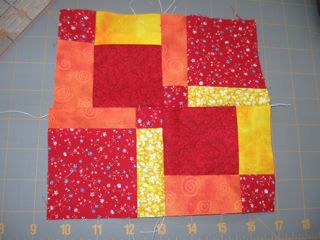 This is my first attempt at a disappearing nine patch block, using scraps left over from the quilt I made my sister. (Inspired by this tutorial.)

Here are some more disappearing nine patch blocks, also made from scraps from the same quilt. 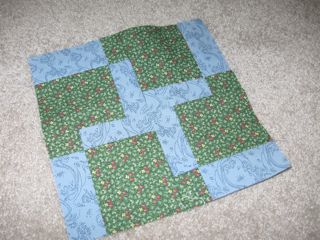 I really liked the way this one turned out. 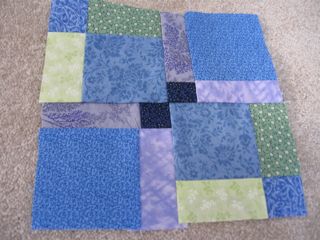 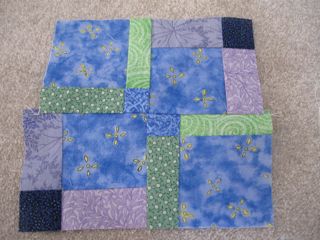 The original nine patch block was askew and was longer than it was wide. When chopped up and reassembled, my original poor alignment became a disaster.

I think this series of blue and green blocks might eventually become a lap quilt. They’ll need some sashing and fairly wide borders to finish them off, though, because I don’t really have enough of the scraps to make anything very large. 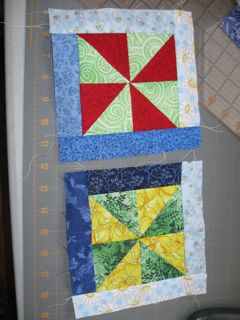 I made a bunch of pinwheel blocks a couple of years ago just to see if I could. I’d never done anything with triangles and was feeling experimental. Then I never could figure out what to do with them. I only made nine and they’re pretty small. I thought about a baby blanket or some throw pillows. The other day I was inspired to start adding blue sashing. I think they look pretty smart.

I don’t have any real projects going right now. I don’t think I have the energy to start anything major either. But it is fun to just play with my scraps and make some blocks I can do something with later.