I thought I’d briefly mention a few of the books that are among Bella’s current favorites. 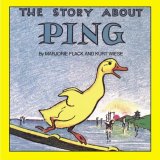 The Story about Ping by Marjorie Flack illustrated by Kurt Wiese. A classic story that I vaguely remember from my childhood about a little duck who lives with his father and mother, brothers and sisters, and numerous aunts and uncles and cousins on a wise-eyed boat on the on the Yangtze River. Ping doesn’t want to get spanked for being the last duck onto the boat so he hides and is separated from his family. He goes on a journey to find them and in the end makes his way back home.

When I went to get Bella up the other morning the first words she said to me were a request for Ping. It’s a great favorite of hers for bedtime reading. The text is very readable and I love the simple drawings, though I’m not sure how many times she’s seen them. 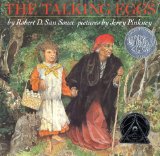 The Talking Eggs by Robert D. San Souci, illustrated by Jerry Pinkney, is an adaptation of a Creole folk tale that has obvious roots in French fairy tales, though with a distinct flavor that makes it very fun to read and do voices. I don’t do voices when I read but I do find my usually non-existent Southern drawl wants to take over when I open this book.

Two sisters named Rose and Blanche—one is industrious, kind, and intelligent, the other is lazy, mean and stupid—each have an encounter with a strange old woman who keeps a two-headed cow that brays like a mule and a flock of odd-looking chickens that sing like mockingbirds and lay eggs that talk. The old woman assigns a series of tasks to each of the girls, virtue is rewarded and vice punished.

My favorite scene occurs when Blanche and the old woman watch rabbits hold a dance in the yard and Blanche falls asleep and must be carried to bed. I’m not sure why but it is charming.

Beautiful illustrations. Some children might be disturbed when the old woman takes off her head.

Wait Till the Moon is Full by Margaret Wise Brown, illustrated by Garth Williams

A little raccoon begs his mother to let him go outside and learn about the night; but she insists that he wait till the moon is full. Meanwhile, he pesters her with questions and gets cuddled and listens to his mother’s songs.

This story has some of the lyricism that makes Brown’s Goodnight Moon one of the most perfect picture books ever. But it is too long and wordy and has a few awkward phrases that bug me every time and it really should have been edited down to about half the length. Still, it is one of the better books out there.

The illustrations by Garth Williams, who illustrated the original Little House books, are beautiful. Muted colors and loving details of the mother sewing and baking and caring for her young one.

Alexander and the Terrible, Horrible, No Good, Very Bad Day by Judith Viorst, illustrated by Ray Cruz follows a little boy through his daily routine.

Alexander has one of those days that just keeps getting worse and worse. The kind where some people say you got up on the wrong side of the bed. (Which always made me wonder as my bunk bed was shoved against the wall and I could only get out on one side.) Much of his woes are his own fault or are due to his bad attitude, others are simply bad luck or the normal ups and downs of childhood. He whines and complains with the refrain “it was a horrible, terrible, no good, very bad, day” (Bella always chimes in on the “day”) and even threatens to move to Australia.

I had fond memories of this book and it was one of the first I added to my collection when I started seriously building a library. And it’s currently one of Bella’s favorites. Has been for some time since she used to ask for it as “Day”. But when I read it to my young nieces shortly after Bella was born they were scandalized by Alexander’s negative attitude and especially by his use of the word “hate” (in reference to lima beans and kissing on tv, not to a person).

I think this book can be valuable to read to children; but I guess it must be handled with care.  Alexander is not a heroic exemplar to follow; but this story could generate some healthy discussions about appropriate ways to respond to various incidents and frustrations. Alexander’s mother and the other adults respond variously to his behavior. Sometimes they ignore his complaints (as when he says he’s going to be carsick when he doesn’t get a window seat in carpool) or reprimand him when he fights with his brother or calls Australia from his dad’s office phone. But my favorite response is at the end when his mother says “some days are just like that… even in Australia.” It is understandable that little children get frustrated by their own awkwardness and inability to control their environment. I suspect that “terrible, horrible, no good, very bad day” will be a refrain in our house to help identify those negative emotions and gently laugh our way through some of the tough times.

Blueberries for Sal by Robert McCloskey

This classic book set in Maine was not a part of my childhood but Dom’s. Bella loves the story of little Sal and her mother who go to pick blueberries and run into little Bear and his mother. McCloskey cleverly draws parallels between the animal and human characters: storing up food for the winter, the smaller children getting separated from the mothers, the mothers who are both distrustful of the other species, even when they are quite small.

The illustrations are wonderfully detailed. I especially love the end papers which depict Sal and her mother in the kitchen canning their blueberries. Sal stands on a chair and threads the rubber rings over a wooden spoon and onto her arm. Bella used to look at the picture and admonish her for standing on the chair.

Jesse Bear, What Will You Wear? by Nancy White Carlstrom, illustrated by Bruce Degen

Anyway, this is a cute story in rhyme that follows a little bear through his daily routine with his mother from dressing in the morning to playing outside, then lunch, then daddy’s homecoming, and finally bath time and bed time. I really like the sense of whimsy when the bear says, “I’ll wear the sun on my legs that run… I’ll wear the rose between my toes….” And playful mealtimes: “I’ll wear my chair cause I’m stuck up there…” as well as wearing all the food, of course. And I like the pictures. They are lovely, full of details and bright fun colors.