Well the bassinet/cosleeper we got when we were expecting Bella (not that she slept in it very much) and which Sophia has been occupying for the last few months was recalled for safety reasons. Which prompted a mini-crisis: Do we buy a new bassinet, which Sophia will only be able to sleep in for another month or so? Or do we go ahead and graduate Bella to a toddler bed and move Sophie into Bella’s crib?

The question was settled by the fact that Target didn’t have bassinets in stock at the store. So although Isabella was quite distressed as we left the store with no bed—“Get a new bed for Phia!” she repeated anxiously—after we left Target we went and acquired a new toddler bed for Isabella.

Which prompted the declaration: “I’m just tired, I want to go to bed,” as we pulled into the driveway.

I foolishly tried to put the thing together by myself. After much heroic stifling of curses I managed to get it together…. and then realized the side slat was upside down and the safety rail couldn’t screw in. And so I had to dismantle half the bed. I waited until Dom came home to try to put it together again. 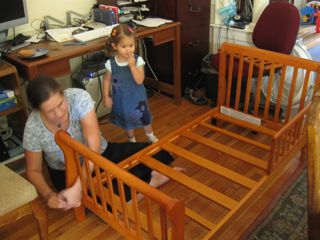 Then we had the grand rearrangement of furniture in the nursery as we tried to figure out how to make everything fit. And then throughout the evening Bella kept declaring that she was tired and just needed to go lie down in her new bed. And of she’d go and pull the blankets on and rearrange all her stuffed animals and dollies and pretend to sleep. 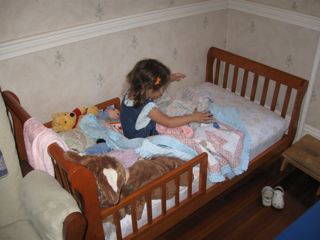 Bella in her new bed.

Since about a month after Sophia was born she’s been climbing in and out of her crib using a step stool. And during the day she’d sometimes climb in to play and climb back out all by herself while I was with Sophie in the other room. But even when we began leaving the side down, she’d never climb out of the crib in the nighttime or even in the morning. I’d go in and find her screaming about a dropped dolly but she’d wait until I went in to climb down and rescue her toy. So I’m curious to see whether she’ll continue to stay in bed until I come in tomorrow morning.

Also, I’m also curious to see how Sophie does in the other room. I don’t really feel ready to have her sleeping so far from me. But unless we’d bought another bassinet there really was no other solution as our room is too small to allow for a crib. Oh well, somehow I’ll survive all these changes. 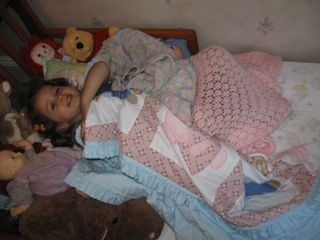