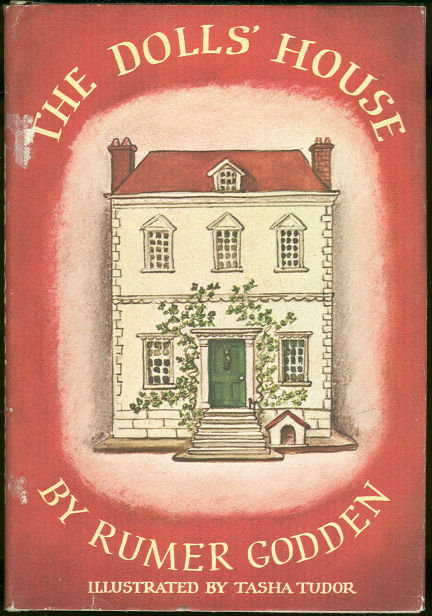 My copy of The Doll’s House

by Rumer Godden is beautifully illustrated by Tasha Tudor, who died last month.

It’s the story of a family of dolls, and especially of a doll named Tottie Plantaganet, a little wooden doll, more that one hundred years old at the time of the story, who is inherited by Emily and Charlotte from their great-grandmother.

The dolls long to live in a doll house rather than a shoe box; but when the girls inherit a doll’s house from their great-great aunt, the house that Tottie used to live in, it comes with a fancy china doll named Marchpane, Tottie’s arch-enemy who almost ruins everything.

Any girl who has ever played with dolls or longed for a doll’s house will love this story. I never had a doll’s house, but I did have two china dolls who longed to live in one. They had two little wicker chairs and a table and that’s about it. Though truth be told, I’m the sort of personality who would have had a great time with a doll’s house for a few days and then get bored and never touched it again. I know because I did that with so many other toys.

In any case, I love the way Godden spins this story from the doll’s point of view. The dolls are aware of their own limitations, they can wish for things but they cannot do anything apart from what the children make them do. I like the way the dolls’ personalities are partly determined by the substances they are made of. It’s also interesting to learn a little of the history of the various dolls.

There’s also a beautiful story of self-sacrifice that raises this sweet tale into something a little more substantial.