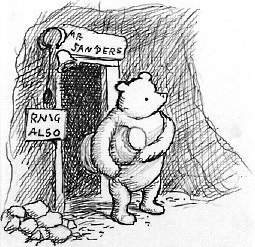 I’ve started reading the Winnie the Pooh stories to Bella and she seems to be enjoying them despite the length and lack of big shiny pictures.

It started because she has a little board book of Eeyore’s Birthday that she’s latched on to recently. It drives me crazy because it is so poorly abridged that the story no longer makes any sense, as if that isn’t important since it’s a book for the toddler set. For example, it says Eeyore is gloomy because it’s his birthday but skips over his bemoaning the lack of presents so one is mystified by why a birthday would make Eeyore sad.

Anyway, I pulled out my The World of Pooh

volume to look up the real story and to see if reading it to Bella might be a possibility. I was dismayed by how long the story was and gave up on the idea. But I left the book laying on the couch. A dangerous thing with Bella around. She found it and recognized Pooh and started to flip through it. Soon she was asking me if I could read it to her. I picked it up and started to read, thinking she would grow bored and wander off long before we came to the end of one story. Which she did. But then we came back to it another day and she sat through a whole chapter. And so we’ve returned again and again. Sometimes we finish a chapter, sometimes we don’t; but Bella doesn’t let that stop her from asking for Pooh again another time.

I’ve found that it is a perfect book for us at nap time or bedtime precisely because it is so long. When I read shorter picture books she frequently wants me to read the same book over and over again and I soon grow bored and surly. Pooh is much more restful to read, with more complex sentences and little jokes that are only funny to adults, and we don’t run the danger of needing the constant repetition—- at least not yet.

I think too many people censor what they read to children, keeping only to materials they think the child can understand. But I’ve often found with Bella that she has patience for books that I would have thought much too old for her. I have no idea how much of the story she understands, probably more than I’d guess. But really at this age comprehension isn’t the point (though I don’t think that lets us off the hook and makes it excusable to give them stories which are incoherent.) She enjoys the rhyme and rhythm of the language, she enjoys the attention from me and the cuddling up close while I read and the drifting off to sleep to the sound of my voice. The story is secondary. She will gradually grow in understanding and one day will surprise me by how much she suddenly grasps.

And that isn’t true just for small children. All of us, even adults, have this experience of being enchanted by the sound of something even when we don’t quite catch the meaning. Just go to a poetry reading sometime. T. S. Eliot wrote somewhere (I can’t recall exactly where I read it; but I’m almost positive it was Eliot.) something to the effect that in poetry the music of the language is primary and the meaning is secondary. In fact, I still find that to be the case with some of my favorite of Eliot’s poems, The Four Quartets. There are long passages that I love the sound of, the feel of the language in my mouth, the play of the images, but I’m still not sure what it means. When it comes to poetry, understanding the meaning is overrated. And also, to some extent, this is true of novels as well.

And so I am committed to reading to Isabella books that are far above her “level”, whatever that is. I do think limited-vocabulary books have their place in encouraging young children who are learning to read and who may become discouraged when faced with page after page of unfamiliar words and complicated sentences. But even at that stage, children can and should enjoy being read to from books that are beyond their ability to read on their own.

As usual the bear called Pooh leads me very quickly into deeper waters. He may be a bear of Very Little Brain; but he certainly challenges my mind.