This is why I don’t like toys that make noise 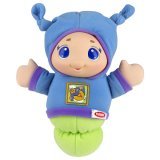 I’m the kind of person who hates having the television or radio on as background noise. Maybe I’m even a little neurotic on the subject. (Once I had a roommate who used to turn the tv on as soon as she came home and left it on until after she went to bed. It shut itself off with a timer after she fell asleep. Drove me up the wall. But I could rant about that for a long time.) I only turn on the radio or play music occasionally, when I’m in the mood. But most often I enjoy the quiet. And so I really, really, really do not like toys that play music and light up. They disturb my calm and peaceful existence. Bella can make enough noise banging on things and singing and chattering without having toys that chatter and sing as well. We can, and do, play music for her on the house speakers. She doesn’t need toys that talk or sing or play music to stimulate her. In fact I’m rather of the opinion that instead of fostering learning and creativity, having too many toys stunts a child’s imagination and overstimulates her. But, that said, we’ve had a few such toys given to us in the past two years and I’ve generally gritted my teeth and allowed Bella to have her fun until the batteries died.

Anyway, long story short, Baby Sophia received this gloworm toy at her baptismal party last week. I hesitated to even take it out of the packaging, even contemplated trying to return it, though it didn’t have a gift receipt and I really hate to return gifts. And then I felt ungrateful and curmudgeonly and decided to allow it to be unpackaged when Isabella asked. Who am I to stand in the way of her enjoyment? And in fact the songs it played were nicer than most toys of this sort.

if I didn’t immediately warm to the toy, my daughter didn’t hesitate. Forget baby Sophia, the toy’s intended recipient, Isabella has since appropriated it as her new favorite dolly. Today she’s been fetching tissues to wipe its nose and wrapping it with blankies and during bedtime prayers tonight she was turning on the light (did I mention that in addition to playing music, its face lights up?) and then pressing the face against the floor to see the reflection in the polished wood.

My prescient husband saw that this light-up feature might be a problem if she took it to bed with her, as it was clear she was planning to do; but I thought it would be fine. Nope. Less than an hour after we put her down, she started wailing. I guess she did roll over on it and it lit up, started playing music, and woke her up.

Daddy had to perform emergency surgery to remove the batteries because, although you can flip a switch to turn off the music, that just puts the toy into night light mode and it’s much too bright to place in a child’s bed while she sleeps. At least in our light-sensitive child’s bed. I fear that I’m going to have to deal with the repercussions when she wakes up and wants it to play music again. (Update: she actually didn’t notice the lack of sound and light and so we never did replace the batteries.)

And I still haven’t figured out how to convince friends and family not to give us the darned things. I really appreciate the thought behind the gift—that they want to do something nice for my children and I feel like such an ingrate, complaining about gifts; but it is frustrating not to have one’s preferences consulted when gifts are given to one’s children. Especially when I have posted a wishlist on Amazon and informed everyone about it. I know Amazon isn’t everyone’s first choice and may even be foreign territory to some people. Guess I’ll just have to keep removing batteries.