Swans and Swings and Happy Things

Bella and I have been experiencing the January cabin-fever blahs. We did get out for a short outing on Tuesday to a local park we hadn’t visited before; but the playground equipment was really too big for her and there was too much snow on the ground for her to really run and play.

Today we returned to our favorite park in Salem, the one near our old house that we used to visit several times a week. I had forgotten how much a trip to Forest River Park is an elixir to my soul. The water lapping the shore, the cries of the gulls, the rolling hills with trees, the rocky outcroppings, the friendly people with dogs who remember us and ask how we’re doing. It had been far too long since our last excursion! Today’s visit left me tired and breathless; but my spirit feels refreshed. 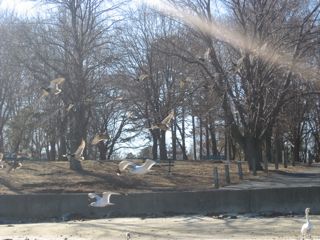 We started off with a nice treat: right near the parking area is a beach where the seabirds had congregated. Plenty of gulls and also ducks and a few swans. We’ve been reading about ducks, swans and gulls in some of our recent picture books, so Bella was especially excited. 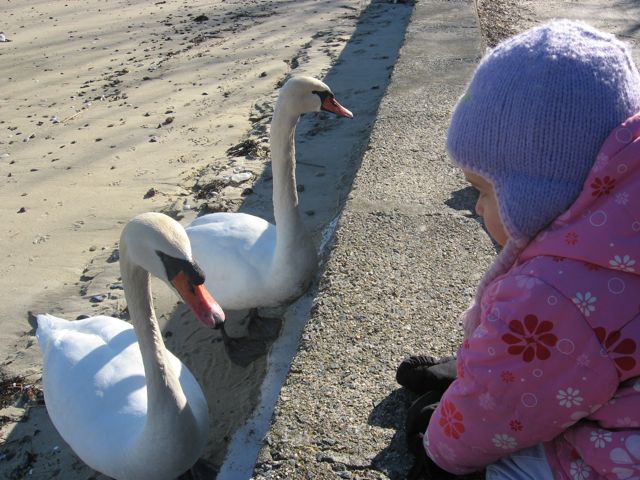 Two swans were begging for treats right up at the sea wall and waddled over to say hi. Afraid the swan might get a bit too eager for a handout, I had to restrain Bella. 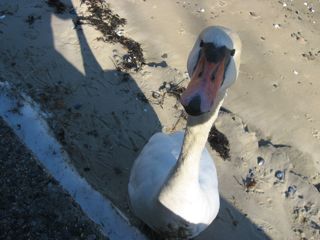 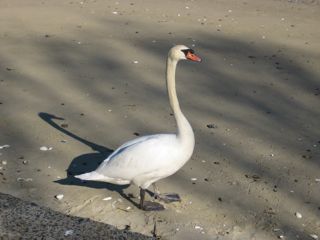 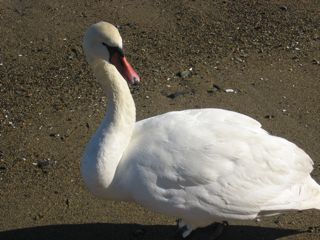 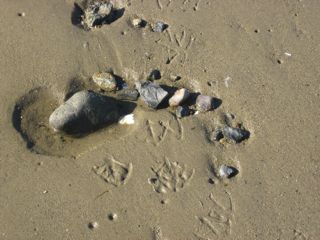 After visiting with the swans, Bella wandered down onto the beach, calling to the gulls and splashing in the wet sand. I tried to restrain her from stomping through the tidal pools. Sunny it might have been, but it was cold. Finally, I had to direct her back. Her pants cuffs were getting wet. She didn’t protest too much, knowing there was the rest of the park to explore.

No sooner were we on the path than she started to run, saying “Run! Run!” A recent word added to her vocabulary thanks to The Gingerbread Man. We met some dogs and saw some squirrels. And I chatted for a bit with one of my park friends. I met him back when I used to walk in the park when I was pregnant with Bella. He lives in the neighborhood and walks his dog in the park every day. He said he was sorry he hadn’t seen us in so long, noticed I was pregnant, told me his son was expecting a baby in a few days. We’ve never exchanged names or anything more than the vaguest pleasantries; but I think of him as a friend and I miss those neighborly meetings in the park.

“Run! Run!” We continued down the path with brief side trips to examine leaves, sticks, guardrails, ice patches, to watch squirrels. Finally, Bella led me to the playground area where I parked myself on a bench to catch my breath while she explored the slides. I was called upon to push Bella on the swings and to lift her onto the rocking seal. At length, when she’d exhausted the newness of the playground, Bella joined me on the bench and ate some bread, cheese and raisins. 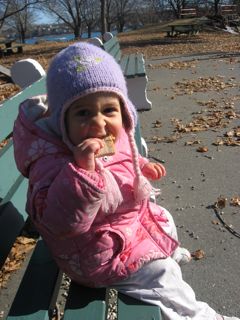 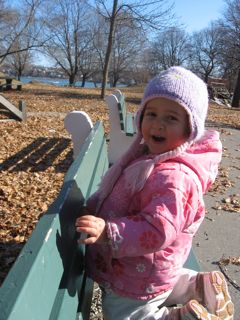 After a while of that she was ready to wander back down the path. I thought we’d go straight to the car; but about halfway there, she saw another bench, this one overlooking a small beach, and decided it was the perfect place to sit and have another round of snacks. It was a great decision for while we were sitting there a couple of boys arrived with their babysitter and a dog on a leash. They explored the beach and kicked at an abandoned sandcastle and Bella enjoyed her dinner theater. 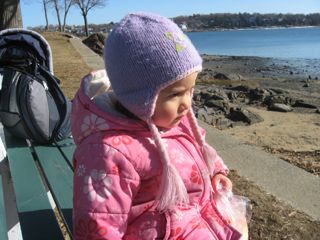 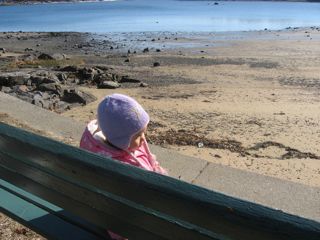