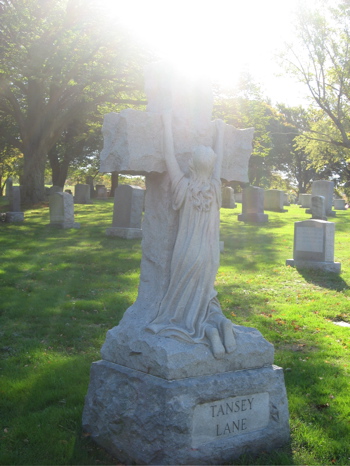 Isabella and I went for a lovely walk this morning in the enormous Catholic cemetery that is just down the street from our house. We had walked down there a few times right right after we moved in this June; but never ventured very far in. Soon the walk became too strenuous, a little too far from home for a newly pregnant mother, a little too much direct summer sunlight, so we haven’t been back in a while. Today, though, was a nice crisp fall day. The sunlight felt warm and refreshing instead of oppressive. And I’ve got much more energy now, well into my second trimester. 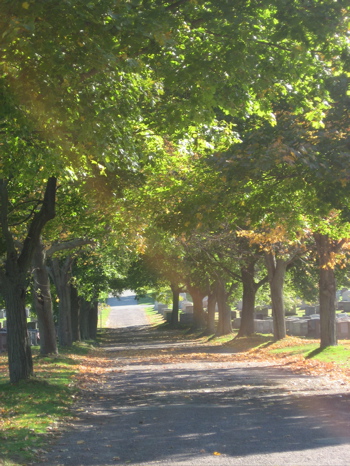 I know some people find graveyards gloomy or creepy; but I’ve always rather enjoyed wandering in them. Especially in older ones with large, shady trees and winding paths. There’s a certain kind of peace and prayerfulness there, an invitation to contemplation. I love some of the older tombstone art, too. Of course, I always take some time to pray for the souls of the departed and to say some other prayers as well. I wish I’d had my rosary with me today it would have been nice to pray it as we walked. I used to keep one in the diaper bag; but somehow it’s been displaced.

This was the first time I’d wandered so far into the cemetery. Like I said, it’s enormous. I climbed a big hill that has always seemed too daunting and from the top was able to see over the river and across the hills, a great view. There was a large statue of Christ at the summit raising his hand to bless the vista, a monument to a former pastor of nearby St Thomas the Apostle, and bench overlooking a nice open area with no graves where Bella could run a bit. I put her down and, after she said hi to Jesus, she had fun collecting sticks and rocks and laughing at only she knows what. 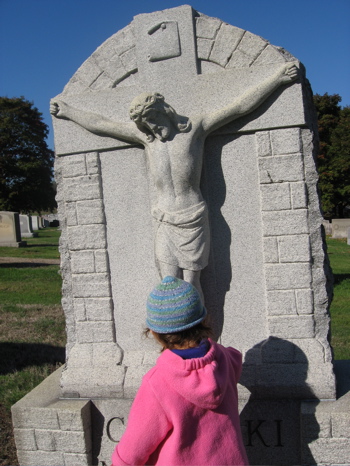 She later led me around and around, wandering up and down the paths, exhorting me whenever I stopped to take a picture, “Go, go! Go, go!” We completely lost track of time, spending more than an hour in the peaceful byways, only interrupted by the roar of the lawnmowers and a few wandering cars. Fortunately, I had some snacks with me: bread, raisins, crackers, cookies. She ate them all and drained her cup before we got home and then had to be put down for a nap right away. 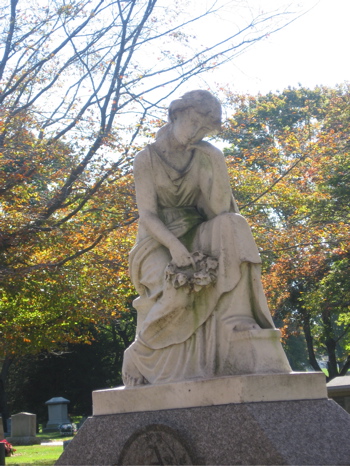 May the souls of the faithful departed, through the mercy of God, rest in peace.
Requiem aeternam dona eis, Domine, et lux perpetua luceat eis.