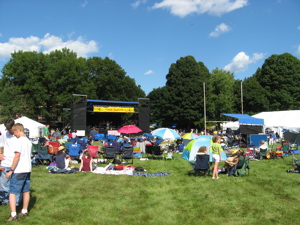 View of the main stage. That’s the vendor tent at the right of the photo. Adoration was in a Marian grotto on the other side of the stage.

For the past seven years my brother-in-law, Peter Campbell, has organized a fabulous event, the Proud 2B Catholic concert. It’s a volunteer-run, family event with lots of great Catholic musicians, inspiring talks, Eucharistic procession and adoration, a rosary led by the Little Brothers of St. Francis, Divine Mercy devotion led by the Sisters of Mercy, games for kids, dozens of priests hearing confessions. The day reaches its climax with a mass and then winds down with more music and the exposition of the Blessed Sacrament. There are Catholic families and youth groups from all over New England come together to pray, worship and celebrate our Catholic faith. 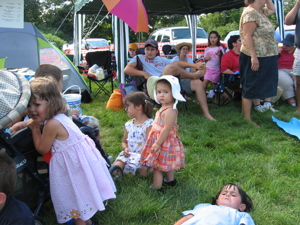 The Bettinelli and Campbell families

This year, and the past two years, the event was held at the Marist House in Framingham, MA, which is a lovely venue.

Dom’s family, of course, all come out to support Pete’s great work, so it’s also an opportunity for us to spend a day with the clan, to watch the kids run and play and eat. Isabella got to visit with her Grandma B., her aunts and uncles and cousins, and plenty of other kids too. It’s also a chance to see many friends, some of whom we hadn’t seen since last year’s concert. They enjoyed exclaiming over how Isabella has grown. We also got to met some blog readers, which was very fun, and discovered that other friends are regular blog visitors as well. Glad to know you guys are out there. I forget sometimes that there are many readers who never leave comments. 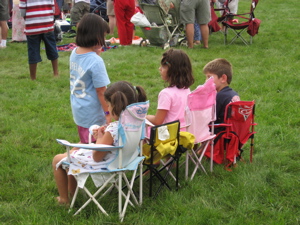 My little nieces and nephews lined up their chairs, preparing for mass

This year my experience was a bit more subdued. We arrived late, having waited to leave until Bella woke up from her morning nap and had a bit of lunch. I was also trying to take it easy, still getting tired quickly and trying to keep up with a busy toddler.

The highlights of the day for me:

A chance to go to confession followed by some time alone in adoration. (I later took Bella back to the adoration grotto to “say hi to Jesus” and sit with me for about ten minutes in the presence.)

A lovely chat with one of the Little Brothers of St. Francis who was so wide-eyed and enthusiastic about everything: “How wonderful it must be to be a mother!” he exclaimed. And asked dozens of questions about Isabella and was so interested and even excited at all my answers.

Mass. Fr. Stan Fortuna, one of the Franciscans of the Primitive Observance, said mass and I love the way he proclaims the gospel, making every word ring out and touch your heart, and preaches the word. One of the best homilies I’ve ever heard. He addresses his audience where they are; but not in a patronizing way and he doesn’t leave you there but raises you up to the heights. He moves from Larry Byrd jokes to quoting Popes JPII and Benedict and John XXIII. 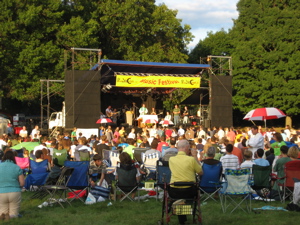 Communion time. All the priests were easily identifiable by the red and white striped umbrellas, making communion go very smoothly.

Dom reconnected with a classmate from Steubenville that he hadn’t seen in 12 years. He and his family were sitting right next to us throughout the day. I’m sure he’ll also post some of his reflections about the day on his blog.

We left around 8, very late for poor little Bella. She fell asleep within minutes and only woke briefly when we stopped to get some pizza on the way home. Lucky for us, she slept until almost 8 this morning. Maybe it is time to reconsider her bedtime.