37 weeks and counting… various musings on the day’s events

Today is my grandmother Scott’s 90th birthday. Yesterday the family had a big birthday bash in Chicago. I called her tonight and she was on cloud nine. Her seven children and their spouses, all but three of her twenty grandchildren (myself, my sister, and my younger brother) and all (four? five?) of her greatgrandchildren attended as well as many friends. Sadly, Dom and I were not able to go for the obvious reasons. Grandma understood, but said we had to come visit with her newest great-grand baby as soon as we can. She also declared that she’s now planning to stick around for her hundredth. She’s ornery enough that she just might make it!

Dom and I had a nice Sunday dinner. We’re trying to establish the tradition of cooking up something special on Sundays. (Though our usual efforts are pretty hard to top.) For some reason it’s been hardest to get something going on Sundays and we often end up scrounging leftovers instead of sitting down together to a nice meal.

I think tonight’s effort was one of my best, if I do say so myself. I rubbed down a butterflied leg of lamb with some olive oil and rosemary and a dry rub mixture called ras al hanout from my mediterranean cookbook. Then Dom did his grill magic and it came out tender and juicy and very flavorful. The yogurt and mint sauce I whipped up complimented it perfectly. Side dishes were glazed carrots as well as an Indian cabbage dish with fennel, sesame and cumin seeds. They balanced out the lamb quite well. I’ll have to be trying this one again soon.

I think the baby has dropped today. I was at the computer earlier and when I stood up I felt a wrench and a pain in my pelvis. Now she seems to be much lower and there is more pressure down in the pelvic area. Of course, this doesn’t really tell me anything about when labor might start, but is a good sign that she’s getting ready to come out. Any time now, little one. We’re ready for you.

Well…I do have a bit more to do on the quilt. And I would like to get out the thank you notes for all the baby gifts… but I suppose if I don’t get them done before she arrives the world won’t end. Still, that’s the agenda for tomorrow and the next day. Stop procrastinating. Get stuff done.

Update:
Here’s a picture Dom took this afternoon. My belly doesn’t look so big in this shot, but sure feels huge to me! And all the books which talk about reduced movement in the ninth month haven’t met my little squirmer. She might have less room to move but she’s making up for it in other ways! 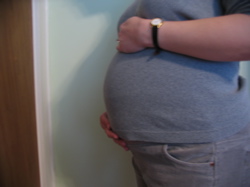